From NovaOrdis Knowledge Base
Jump to: navigation, search
Graph

A graph G is a pair (V, E), where V is a finite set of vertices, called the vertex set of G, and E is a binary relation on G, called the edge set of G.

An elements of the vertex set V is called vertex (plural vertices). An alternate term for vertex, used sometimes in the graph theory literature, is node. We prefer to use the term "node" when we refer to the vertices of rooted trees. We use "vertex" as a more generic term that refers to graphs in general. Another alternate name is entity.

A directed graph is a (V, E) pair where the edge set E contains directed edges: the order in which the vertices are specified when the edge is defined matters. For a directed graph, (u, v) and (v, u) are distinct edges. That is why we sometimes write the edge as u → v and v → u. 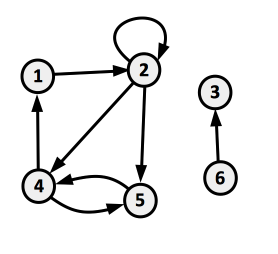 A characteristic of a directed graph is that self-loops, edges from a vertex to itself, are allowed. A self-loop is a cycle of length 1.

A directed graph with no self-loops is simple.

An undirected graph is a (V, E) pair where the edge set E contains undirected edges: the order in which the vertices are specified when the edge is defined does not matter and (u, v) is equivalent with (v, u) - they are considered to be the same edge. Another way to define an unordered graph is that its edges are sets {u, v} where u, v ∈ V and u ≠ v.

Self-loops are not allowed in an undirected graph. Every edge consists of two distinct vertices.

An undirected graph in which each pair of vertices is adjacent is called a complete graph.

A forest is an acyclic, undirected graph. Note that the graph may be disconnected.

A tree is a connected, acyclic, undirected graph. A tree defined as such is sometimes referred to as a free tree. More details about trees are available in the Tree Concepts section.

The vertex degree is the count of edges incident on, from and to the vertex, depending on the type of the graph.

The length of the path is the number of edges in the path.

There is always a zero-length path from u to u.

If there is a path p from u to u', we say that u' is reachable from u via path p.

A self-loop is a cycle of length 1.

An acyclic graph is a graph that has no cycles.

A directed acyclic graph is sometimes abbreviated to DAG.

One of the practical applications of DAGs is to model dependencies between entities: a directed edge between vertices u and v means that u "depends on" v.

An entire undirected graph is connected if it has exactly one connected component.

Applies to directed and undirected graphs.

An adjacency list representation provides a memory-efficient way of representing sparse graphs, so it is usually the method of choice.

Applies to directed and undirected graphs.

Searching a graph means systematically following the edges of a graph so we visit all the vertices of that graph. Techiques for searching a graph lie at the heart of the field of graph algorithms.