From NovaOrdis Knowledge Base
Jump to: navigation, search
Python Language

Expand the following sections and subjects:

Python is a general-purpose, high-level, dynamic language. Its design makes it very readable. Its relative tenseness makes it possible to write a program that is much smaller than the equivalent static language program. However, if the program is CPU-bound, a program written in C, C++ or Java will generally run faster than its Python equivalent.

Python programs can be executed in two modes: interactively via an interpreter, also called a shell, or stored into a file with the usual, but optional .py extension and run by typing python followed by the file name.

In Python, everything is an object. This includes numbers, strings, tuples, lists, dictionaries, functions and programs. The ID of any object can be obtained with the built-in function id(). The definition of an object is called class.

Printing done with print() function in Python 3 (it uses to be a statement in Python 2).

Printing to stdout in Python

In Python, spacing does matter, sequential blocks are indented at the same level, and they are known as indented blocks. Python uses white space to define program structure.

Everything from # to the end of the line is comment. Python does not have a multi-line comment.

Python encourages short lines. Recommended maximum line length is 80 characters. To continue a line on the next line, use backslash:

Reserved words, or keywords, can only be used to mean the thing Python expects them to mean. They cannot be used as variable names, function names, class names, or identifiers.

The as Reserved Word

Literals have a type.

Constants are fixed values, they do not change throughout the program. Constants can be boolean (True, False), numeric (integers or floating point numbers), or strings, which can be single quoted or double quoted, or even "the absence of a value" (None). Constants can be assigned to variables, can be arguments of functions. Constants have a type.

Python does not have anything equivalent to final in Java, so any variable can be modified after assignment. You can use:

for clarity, but nothing prevents CONST_NAME to be assigned other value later in the program.

Triple double-quoted strings is the recommended style for docstrings.

Variables are names associated with memory locations used to store values. Variables and identifiers are equivalent. Variables are declared and assigned a value though an assignment statement. The assignment does not copy a value, it just attaches the name to the object that contains the data. A variable may be associated with an object that has a type, and the same variable may be assigned later an object of a different type. A useful mental representation of a variable is a sticky note that can be attached to an object, and then re-attached to a different object, not necessarily of the same type.

Variables declared in functions should be lowercase. For more details see:

Names that being and end with two underscores (__) are reserved for use within Python, for built-in variables.

__name__ is a built-in variable which evaluates to the name of the current module and it is set differently depending on whether the module is imported or executed. For more details see:

Distinguishing between Importing and Executing a Module

Contains the name of the file the function was loaded from.

A namespace is a collection of names that can be used to access various underlying Python objects, such as data instances, functions, classes, etc. Multiple namespaces can co-exist at a given time, but they are isolated from each other. Within a namespace, a particular name is unique. A Python program has three kinds of namespaces: built-in, global and local. 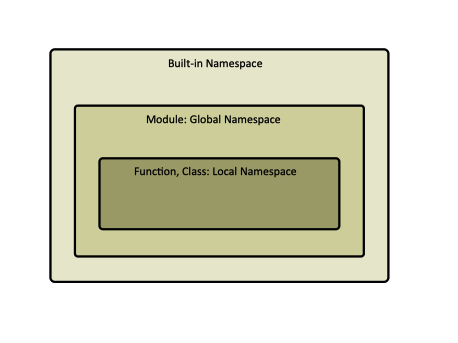 A scope is the portion of a program where a namespace can be accessed directly without any prefix. At any given moment, there are at least three nested scopes: the scope fo the current function that has local names, the scope of the module, which has global names and the outermost scope that has built-in names. When a reference is made inside a function, the name is searched in the local namespace, the global namespace and finally in the built-in namespace. If there is a function inside another function, the embedded function's local scope is nested in the upper level function's local scope.

The variables declared in higher scopes can be read, without any prefix, but unless they are prefixed with the namespace they belong to, they cannot be modified. Only the variables in the same scope can be modified. If we try to modify a variable from a higher scope without prefixing it (which we can read without prefixing it), a local variable with the same name is created and that variable is written. For more details see Interaction between Local and Global Variables, below.

Get Names in a Namespace with dir()

The built-in function dir() returns a list of defined name in a namespace. Without arguments, it produces an alphabetically sorted list of names in the current local symbol table. When given an argument that is the name of an imported module, dir() lists the names defined in the imported module.

Interaction between Local and Global Variables

If a global variable is accessed inside a function, and then there is an attempt to change it, the program throws an UnboundLocalError:

If global is not explicitly declared inside a function, Python uses the local namespace and the variable is implicitly local. Local variables are discarded after the function completes.

An identifier is a name given to objects. Everything in Python is an object, so the name is the way to access the underlying object. An identifier and a variable are equivalent.

Everything in Python is implemented as an object, and any object has a type. The type determines whether the data value of the object is mutable or immutable (constant). Python is strongly typed, which means that the type of an object does not change, even if the value is mutable.

The type of an object can be obtained with the built-in function type() applied to the variable or a constant the object is assigned to. In Python, "class" and "type" mean pretty much the same thing.

None is a special Python value that holds a place when there is nothing to say. It is not the same as False, although it looks false when it is evaluated as a boolean. None can be used with the is or is not operators:

None is returned by a function that does not contain the return statement. None is useful to distinguish a missing value from an empty value. Zero-value integers or floats, empty strings (''), empty lists [], empty tuples (,), dictionaries {} and sets set() are all False but are not equal to None.

Numbers with a decimal point.

There are three kinds of sequence types: strings, tuples and lists. Both contain zero or more elements, in both cases elements can be of different types. Strings and tuples are immutable. Lists are mutable. Mutability matters when the objects are stored in sets or as dictionary keys, because the collections are hashed in that case. If hashing a collection is not a concern, the rule of thumb is that fixed-size records of different objects are best represented as tuples, while variable-size collections of similar objects are best represented as lists.

There are built-in function that can be used for type conversion:

If the string int() is invoked on cannot be converted to an integer, the function invocation throws a ValueException.

Convert other Data Types to Strings with str()

If numeric types are mixed, Python will automatically convert them:

A Python data structure is, for example, what you get when you parse a JSON-serialized text and you recreate the lists and the maps in memory.

Iterate over Code Structures with itertools

In Python 2, print used to be a statement, while in Python 3, print() is a function.

The assignment statement assigns a value to a variable. The assignment does not copy the value, it just attaches the variable name to the object that contains the data.

Statement that Does Nothing

pass is a statement that indicates a function does nothing:

Multiple Comparisons in a Single Expression

Membership in a collection can be checked with the in operator. In case of a dictionary, in check the existence of a key:

The membership operator is commonly used in for loops.

The following rules apply, and they are specified in the order of their descending precedence:

if, elif and else. are Python statements that check whether a condition is True.

In the following case, once one of the alternative is triggered, the corresponding block is the only one that is executed, and the control gets out of the if statement. else is optional.

A for loop is finite, it goes through all elements of a collection: all the lines in a file, all the items in a list, all the characters in a string, all the keys in a dictionary, etc. As part of the for syntax, the iteration variable follows the reserved word for, which is followed by the reserved word and operator in, which is then followed by a collection, which can be declared in-line or using a previously declared variable. The iteration variable iterates through the sequence (ordered set) and takes, in order, each value in the sequence. The statements to be executed in the loop are part of an indented block. The body is executed once for each value in the sequence.

⚠️ is collection is None, then the statement will fail with TypeError:

Iterate over a Dictionary

for can also be used to iterate over multiple sequences at the same time, using the zip() function.

break is a reserved word that indicates a statement which breaks out of the loop. When encountered, the execution goes to the first statement after the loop.

Python has a syntactical oddity that allows checking whether a while or a for loop did not exit with break:

continue is a reserved word that indicates a statement which skips the current iteration and starts the next iteration. The control goes to the top of the loop.

Iterate over a List in Reversed Order with reversed()

Adding a Comma after All but Last Element

If more complex processing is needed for each element, us a list comprehension.

Python comes with a large standard library of modules that perform many useful tasks. This functionality is kept separate from the core language, to avoid bloating. However, they are shipped as part of the Python installation, so they are available locally wherever the Python runtime is installed. Because they the modules are shipped as part of the Python Standard Library, they are sometimes referred to as "standard libraries". When you are about to write some code, it's often worthwhile to first check whether there is a standard module that already does what you want.

The authoritative documentation for the modules included in the standard library is available here:

An introduction to the standard library is provided by this tutorial:

More documentation on the standard library is available here:

The index of the modules shipped as part of the standard library is available here:

The Python Package Index (PyPI) is a repository of software for the Python programming language. PyPI helps with finding and installing software developed and shared by the Python community.

It can be searched with pip search.

To upgrade pip within an already initialized virtual environment:

The dependencies installed in a virtual environment are used automatically if the interpreter is ./venv/bin/python.

It is a good practice to avoid storing the content of venv or equivalent in source control. The content is populated locally on the developers' machines.

Distinguishing between Importing and Executing a Module

Layout and Structure of a Python Project

Layout of a Python Project

Generic appellative given to the names enclosed within "__", for example "__main__".

This is how to check the interpreter version at runtime: