From NovaOrdis Knowledge Base
Jump to: navigation, search
Git Rebasing

Rebasing is one of the two main ways to integrate changes from a branch into another. The other way is merging.

Rebasing rewrites history, by removing the commits that are being rebased and creating new, equivalent ones. See Merge by Rebasing below. 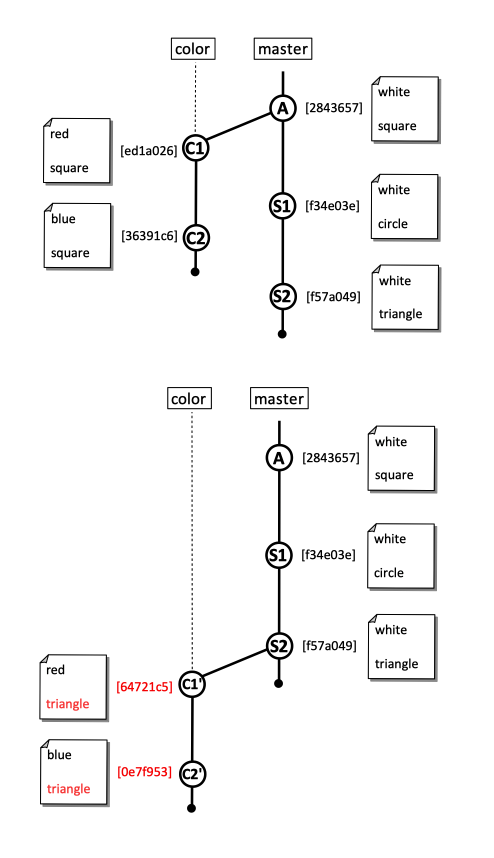 Merging two branches as described above is the main use case for the rebase. However, rebase can also be used when only one branch is involved to modify the message of the last commit, or even arbitrary commits, reorder commits, delete commits or coalesce several logically-related commits into one commit (squash commits).

Rebasing removes the commits that are being rebased and creating new, equivalent ones.

One might to "shift" the head branch in preparation of a merge of the head branch into the base brach. The result of the operation is that all commits applied on the head branch are shifted at the top of the base branch - a side effect is that the commits are modified in the process (the history is rewritten). The advantage of doing that is that when the merge occurs, is a simple fast forward merge, and no additional merge commit is created - the changes required by the merge are already worked into the commits that are rebased.

TODO: research. Before doing that, don't we want to pull --rebase the base branch?

At the end of this step, the branches still exist, but now the head branch can be merged into the base brach by fast forwarding it - a merge commit is not required.

What to Do if the Base Branch was itself Rebased

It is not uncommon to attempt to merge into a base branch only to find out that the base branch itself was rebased, so the commits we were relying on were rewritten. It is still possible to rebase/merge with minimum of effort, without to have to wade through a massive amount of conflicts. The procedure is described below:

Fixing a Merge Broken by Base Branch Rebase

It is sometimes desirable to move an entire branch forward, "in top" of its base branch, to take advantage of the latest developments on the base branch, without necessarily merging. For that, the simplest procedure is to find the common ancestor, then use the following syntax, assuming we are on the head branch we want to move forward:

Immediately after that, the head branch must be force-pushed:

otherwise we get this:

Update the Commit Message of a Specific Commit

Update the Commit Message of a Specific Commit

The order of commits on a branch can be changed by initiating an interactive rebase, and reordering the commits with the help of the editor.