There are two Amazon Elastic Compute Cloud (EC2) platforms: EC2-VPC and EC2-Classic. EC2-VPC is aimed at launching AWS resources into a virtual private cloud (VPC). Also see Determining Whether You Are Using the EC2-VPC or EC2-Classic Platform.

AMIs can be chosen based on region, operating system, architecture (32-bit or 64-bit), launch permissions and storage for root device.

Every time an EC2 instance is launched, a root storage device is created for that instance. The root storage device contains all the information necessary to boot the instance. An AMI can be either backed by Amazon EBS or backed by instance state. Backed by Amazon EBS mens that the root device for the instance launched from the AMI is an Amazon EBS volume, created from an Amazon EBS snapshot. Backed by instance state means that the root device is an instance store volume created from a template stored in Amazon S3. For more details: https://docs.aws.amazon.com/AWSEC2/latest/UserGuide/ComponentsAMIs.html#storage-for-the-root-device.

From an AMI, you can launch an instance, which is a copy of the AMI running as a virtual server on a host computer in Amazon's data center. You can launch multiple instances from an AMI. An instance can be accessed using its public DNS name or public IP address. The DNS name follows the following pattern: ec2-<public_ip>.<region_code>.compute.amazonaws.com. An instance keeps running until it is explicitly stopped or until they fail. You can start from an existing AMI, log onto the instance, customize it with additional settings and software, and then save this customized image as a new AMI.

An instance specifies its networking by declaring a list of network interfaces. An example of how to specify networking as a CloudFormation resource is available here:

Creating an EC2 Instance with CloudFormation

An EC2 instance has access to several sources of storage (block storage devices provided by EBS, storage that is physically attached to the host computer running the instance, a file system provided by EFS), each with particular performance and reliability characteristics. EC2 instances can also use storage provided by S3 to store backup snapshots of their primary storage devices and instance store-backed AMIs. These storage options can be used independently or in combination. 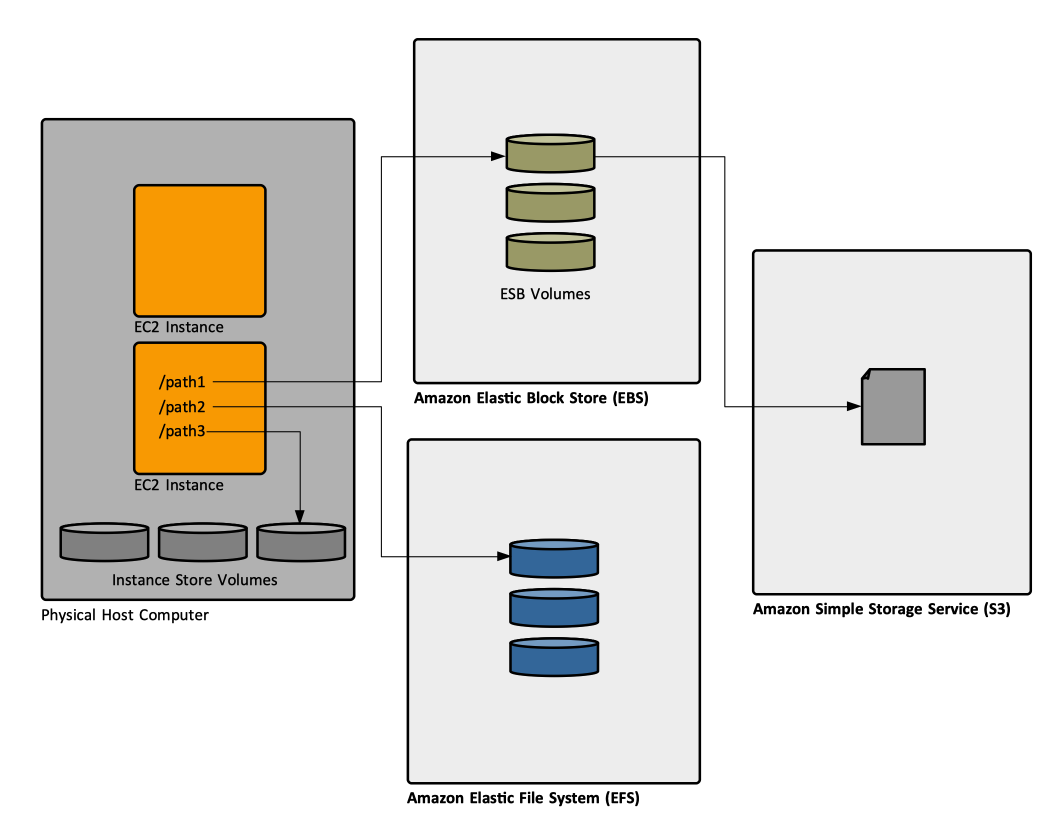 Virtual storage devices, representing cloud storage, or paravirtualized storage in general, are typically exposed in through /dev/xvd nodes. /dev/xvda1 is the first partition of the first such device.

Every time an EC2 instance is launched from an AMI, a root storage is created for that instance. The root storage device contains all the information necessary to boot the instance. It is common to inspect the AMI and see the block device mapping specifies a /dev/sda device:

but then an instance is created from that AMI, the root device is available as /dev/xda:

In addition to the root device, other storage volumes can be specified when an AMI is created, or when the instance is launched. An Amazon-provided AMI includes a root device only; to add more block devices to an AMI, a custom AMI must be created.

S3 can be used to store backup copies of data and applications, such as ECS snapshots and instance store-backed AMIs.

An EC2 instance needs the name of a pre-existing key pair to secure ssh access to itself. A key pair is region-based.

It does. not seem to be a way to created key pairs with CloudFormation.